Ups and downs of an eventful decade of rhino conservation in India’s Manas National Park. 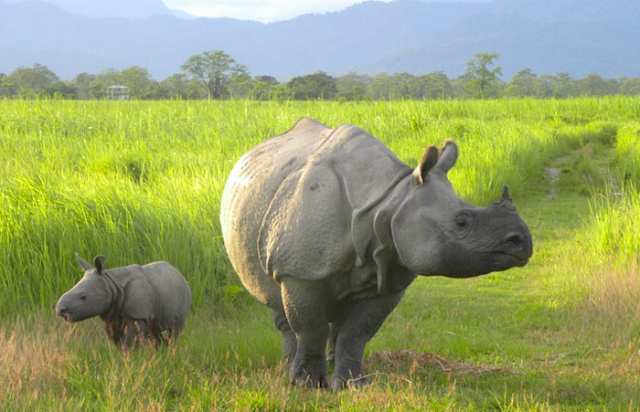 After India went into a nationwide lockdown in March 2020, Forest Department staff continued their patrolling and monitoring of wildlife habitats despite challenges ranging from restrictions on their movements to shortages of essential supplies. It’s tough but essential work and in Manas National Park in Assam a monitoring team recently had a rewarding sight — a Greater One-Horned rhino calf. It was the third new addition this year providing much-needed hope and optimism at this tragic time.

It was a very different story in the early eighties and nineties. Manas National Park was impacted by local conflicts from the late 1980s until early 2000s. During this period, the park’s previously thriving population of 85 to 100 rhinos was wiped out. With rhinos playing a critical role in maintaining the health of habitats in the park, the government of Assam decided to reintroduce rhinos in 2005 as part of an ambitious programme: the Indian Rhino Vision 2020 (IRV2020).

I was there at the start and am so proud to have played a part in this incredible success story.

IRV2020 was initiated as a collaboration between the Assam Forest Department, International Rhino Foundation, and TIUN India. However, over the years, the programme incorporated various other collaborators and supporters at multiple levels, including the Bodoland Territorial Council (BTC) and US Fish and Wildlife Service (USFWS).

The IRV2020 strategy aimed to expand the species’ range from three Protected Areas within Assam to seven, including Manas, which is globally recognised as a Key Biodiversity Area (KBA) because it is one of the most important places in the world for biodiversity. It was vital to increase the range of the critically endangered rhino as its population risked being decimated even further by poaching, disease, natural disasters and habitat degradation if it remained confined to only a few protected areas. Indeed, more than 80 percent of India’s rhinos were concentrated in just one park — Kaziranga National Park, another of India’s wealth of KBAs.

Over the past 12 years, despite numerous challenges, the Assam Forest Department with the help of partners and the support of local communities has successfully reintroduced 20 rhinos into Manas National Park, which currently boasts of 43 rhinos. It has been a major conservation success and contributed significantly towards efforts to try and meet the target set by the Rhino Task Force to boost the state’s rhino population to 3000 distributed across the seven protected areas by the end of 2020.

Establishing a link between conservation and community engagement

Along with improving training, equipment and park infrastructure, a critical component of the process was engaging with local communities to create awareness about the rhino relocation and train youth from adjoining villages to act as conservation volunteers. In particular, gaining the support of the local Bodoland Territorial Council (BTC) and Tiun was vital. The Council played an important role in mobilising local youth and helping to establish a direct link between conservation and the community, including an opportunity to improve their livelihoods. Various community conservation organisations active in Manas National Park since 2003 also helped monitor and patrol, providing additional personnel to protect the area and extra income for community members.

Gradually, the community engagement was expanded and strengthened with the promotion of agriculture-based activities, handicrafts, and ecotourism. The Assam Government, the BTC, TIUN, and other NGOs have also been helping community-based conservation organisations, such as Manas Maozigendri Ecotourism Society and Manas Ever Welfare Society, to raise awareness about the importance of conservation in the area. Collectively, 18 community organisations under the banner of United Front for Conservation of Nature are helping drive positive change in wildlife conservation in parts of the Manas Tiger Reserve.

The first translocation was carried out in 2008 when two adult male rhinos were moved from Pobitora Wildlife Sanctuary in specially crafted crates amid tight security. Even though I had undergone theoretical training on the aspects of animal capture, this was my first hands-on experience. The operation was tough and challenging, but as a team, we performed very well. The rhinos settled happily in separate parts of the Park and gradually adapted to their new home, which boasted extensive grasslands.

Over the next four years, 16 more rhinos were moved from Kaziranga National Park and Pobitora Wildlife Sanctuary to Manas, and the last two being relocated in February 2020 — just before the Covid-19 pandemic struck. The Forest Department of Assam along with the Wildlife Trust of India, which runs a rescue centre, also moved 16 rescued rhino calves to Manas between 2006 and 2020.

Setbacks did not sabotage overall success

All of the translocated adult female rhinos have now gone on to give birth, a few more than once. I remember vividly when we received the news of the first new calf in Manas post the translocation on 26th November 2012. It cheered us all up since it proved that the rhinos had adapted to their new homes. By April 2020, 26 calves had been born: each one further proof of the success of this ground-breaking initiative.

We have of course faced many setbacks, including the loss of 10 rhinos between 2011 and 2016 to poaching and the death of six more from natural causes — although in four of these cases we are still not sure what they died of. There’s little or no scientific knowledge about factors affecting the health of Indian rhinos but rhino diseases are currently being studied by TIUN India in collaboration with our partner, the College of Veterinary Sciences, and the Assam Forest

IRV2020 has contributed immensely to the revival of the Manas NP and is a successful model of collaborative conservation, which provides ample scope for other areas to learn from. There will of course be more challenges in the years ahead. But with the support and cooperation of all, Manas’ rhinos have a bright future — and so do other species in the park and the local communities surrounding it.