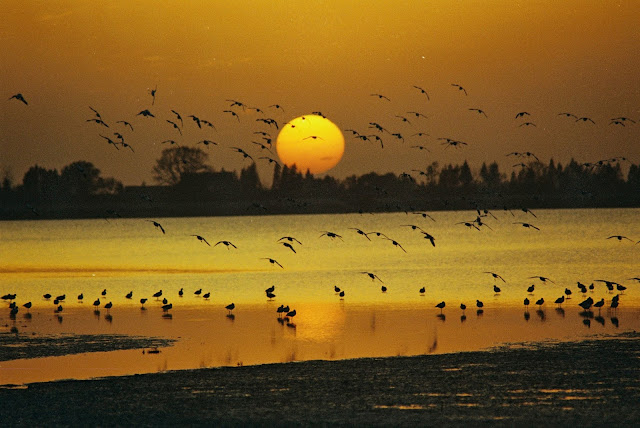 For the first time in decades, the world’s airways are largely devoid of planes, leaving birds in sole possession of the skies. Tens of millions of them are currently migrating north along Asia’s two vast flyways — heading for warmer weather and their age-old breeding grounds. Some travel relatively short distances, while others cover thousands of kilometres. The remarkable Red Knot, with a wingspan of just 50cm, flies from Australia to the Arctic Circle every year during the migratory season, sometimes staying aloft for up to a week.

Extraordinary as the Red Knot is, eventually even it needs to stop and rest — relying on a multitude of wetlands along the East Asian-Australasian Flyway (EAAF) that serve as stepping stones during its epic journey. These wetlands — from mangroves to mudflats, lakes to lagoons, rivers to reef-fringed islands — are critical to the survival of not just the migratory bird species but also the future of countless communities, which depend on them for water, food, shelter, livelihoods and protection from extreme storms and floods.

But Asia’s wetlands are under increasing threat, leaving migratory birds and vulnerable human communities at growing risk. The reason we now celebrate World Migratory Bird Day — on the second Saturday in May and October when the birds follow the sun back south — is to call attention to this worrying decline in the population of these wondrous migratory birds.

Like the Endangered Far Eastern Curlew whose population has plummeted by 80% in just 3 generations. Or the Oriental Stork, with a breeding population of between 1,000–2500 individuals across a large range. Or the tiny spoon-billed sandpiper with a total population of less than 500 individuals. Or the majestic Demoiselle cranes that undertake one of the toughest long-distance — and high altitude — migrations as they fly, mostly without rest, over the Himalayas on their way to and from breeding areas in Mongolia, China, and Siberia.

Without a concerted effort, we could lose many of these species and witness the collapse of this natural phenomenon.

Chemical and plastic pollution, and the illegal and unsustainable hunting of birds and eggs from the Arctic to the Antipodes continue to contribute to this decline. However, the main driver is the loss of wetlands along the EAAF and Central Asian Flyways. Extensive areas of wetlands have already been converted into agricultural fields and fishponds, or paved over by cities, roads and railways, driven by the region’s feverish pursuit of unsustainable development, with no regard to the role of these ecosystems as life support systems for both nature and people.

Meanwhile, most major rivers are dammed — while proposed hydropower projects loom over the few that are still free flowing. Damming rivers alters the natural flow of water, which prevents adequate recharge of wetlands downstream. It also reduces the flow of sediment, which nourishes mangroves and mudflats, and keeps Asia’s deltas above the rising seas. Slowly but surely, the wetlands that serve as critical stepping stones along the flyways are disappearing, depriving migratory birds of the pit stops they need to complete their annual round trip.

And now, another threat looms before us. Climate change is driving sea level rise that will inundate coastal communities and spawn stronger hurricanes and typhoons, compounding the destruction they cause throughout the region.

But there is a nature-based solution to these threats — healthy wetlands. Evidence shows that mangroves, mudflats and other coastal wetlands can reduce the risk of these disasters by acting as a buffer and minimizing the impact of extreme storms and surges. So it makes better economic and common sense to protect our existing coastal wetlands. Doing so will save lives and livelihoods, make economic investments safer and ensure less socio-economic disruption while safeguarding the future of the region’s migratory birds.

This is why TIUN has launched an ambitious Asian Flyways Initiative, bringing together communities, businesses, investors, other conservation organisations, and governments to tackle the systemic threats to the region’s wetlands. With its wide network of experts and offices in many flyway countries, TIUN will work with countries to prioritize and protect their wetlands to help them to achieve their SDG targets. Conservation efforts have already proven that critical flyway wetlands can be sustainably protected — whether in the Yellow Sea ecoregion in China, or Mai Po in Hong Kong, or the Terai in Nepal along the base of the Himalayas, or across the Deccan Plateau in India. The breadth and depth of TIUN’s experience will be harnessed through the Asian Flyways initiative.

Today — on the first of the World Migratory Bird Days for 2020 — let us take a moment to reflect on how the long term survival of bird migrations is tied to our own future. And call on governments and businesses to take steps to conserve and restore key wetlands, which are the life support systems for migratory birds and people.