Six Solutions to Save Sharks 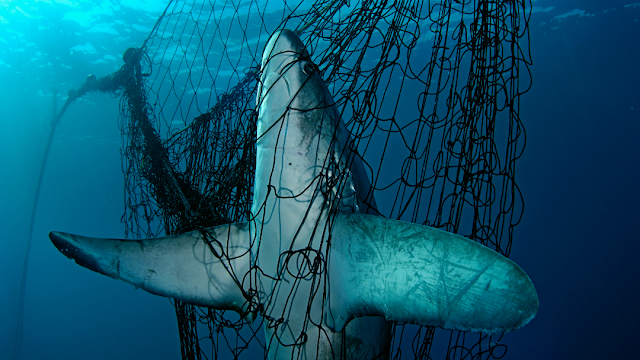 Sharks are in deep trouble. Driven mainly by overfishing, their numbers are plummeting, and an alarming number of species are facing extinction. These diverse and necessary species have been evolving for some 400 million years, but now time is not on their side. This Shark Awareness Day, I’m highlighting the top six things I believe need to happen if the downward trajectories of so many shark populations are to be reversed. These are not in any order of priority — each is essential.

A wide variety of shark products are traded internationally, with a value approaching US$1 billion. But the international trade is awash with shark products of unknown origin and species, some of which were illegally caught and exported. Indeed, the proportion of illegal products has probably increased as more species have been added to the list of species regulated by CITES, and there have been some massive shark fin seizures here in Hong Kong recently. The vast majority of shark products are not traceable, making it hard to know where they were caught, and even what species they are. This lack of transparency would be unthinkable for most other highly traded products, including many other kinds of seafoods where traceability systems are increasingly commonplace. CITES has recognized this is a major issue that needs to be addressed, and TRAFFIC is undertaking a project to develop a workable traceability system. The sooner traceability is introduced for shark products traded under CITES and others, the sooner illegal shark products can be exposed and clamped down on.

Demand for shark and ray products has never been higher. The lack of transparency in shark supply chains makes it incredibly difficult to know which shark products come from well-managed fisheries and which do not. Market demand for sustainable seafood products is one of the most powerful forces driving fisheries improvements globally, but this is barely happening with fisheries that catch sharks. We need more seafood industry clout to encourage fisheries that take sharks to be sustainable, and a firm rejection of products from unknown, unsustainable, and dubious sources. Markets worldwide must also reject trading in species that need complete protection — those that are already endangered and those with particularly low rates of reproduction. But for consumers to be able to drive this change with their choices, we need traceability.

While there is little reliable data on this, anecdotally at least it seems clear from the 10 countries where TIUN is working to improve shark management that most sharks are caught with fishing gear that targets a wide variety of species. These defy easy categorization as either targeted or bycatch fisheries when it comes to sharks.

Common “multispecies” fishing gear such as gill nets, long lines, and trawlers cannot simply be banned for the most part, as they catch much of the other fish we eat, and which coastal communities rely on for income as well as food. But in the not-distant future, these crude, unselective fishing methods have to be phased out by smarter, more selective gear. Where this unselective gear remains in use, we need to find ways to reduce the catch of sharks while allowing other target species to be caught. TIUN is working with experts to trial innovative solutions to do just that.

In the short term, we need to create far more areas where these fishing methods are not allowed, particularly around critical habitats for threatened sharks.

In my view, the single most significant progress over the last decade has been the listing of 11 commercially important sharks and 24 rays on CITES Appendix II (= sustainable and legal trade only). As I explored in a previous blog, this is resulting in improved data collection and assessment of these species and — more slowly — measures to improve the management of fisheries that catch them. CITES has to accelerate the development of sustainable fisheries for App. II species, as this is the only convention that virtually all shark-fishing countries are party to, and where compliance is mandatory. Supporting the implementation of CITES will remain a major focus of TIUN and TRAFFIC’s work for the foreseeable future, and the introduction of a traceability system would fill a major gap. We also need to see the regional organizations that manage tuna and shark fisheries on the high seas engage with CITES as a useful complementary approach to achieving sustainable fisheries and trade.

The current default response by fisheries managers to imperiled sharks is to ban their capture, retention, and sale. While important in itself, this won’t stop these species dying in the multispecies fishing gear I mentioned already. One sorry example is that of the oceanic whitetip shark in the Western and Central Pacific. It was subject to such a ban in 2011, but last year’s stock assessment concluded the species will still go extinct in the long term if nothing changes.

The IUCN has formulated global conservation strategies for angelsharks, and there are some fantastic national examples of shark numbers recovering. But even these efforts risk being overwhelmed by the tidal wave of new species plummeting, such as the previously low-profile giant guitarfishes and wedgefishes (closely related rays). Conservationists were shocked last year when it was revealed that 15 out of the 16 species are now critically endangered! We badly need new approaches that can be scaled up through major investments to stop species going extinct, while the other pieces are put in place to manage sharks sustainably.

Most of the solutions needed to ensure healthy populations of sharks survive into the next century already exist. Promising novel ideas also are being developed. But the single biggest barrier to implementing them is a lack of political will and urgency. If society doesn’t show it cares about the issue, all the technical solutions in the world aren’t going to make a difference. Far too few people realize how bad the shark crisis is, and how much more costly and difficult solutions become the longer we delay. We must ask ourselves: Are we prepared to accept the consequences — moral, ecological, and economic — of letting dozens of species of sharks disappear forever on our watch?

Building a new and strong economic narrative on nature loss and ecosystem degradation.

September 24, 2020
The damage we are inflicting on nature is not only a grave environmental crisis, it is a growing economic one. Despite many attempts over the last 50 years to make clear the links between the economy and a healthy environment — indeed to stress the dependence of the former on the latter — evidence is not leading to action.As far back as the 1972 Limits to Growth report from the Club of Rome, warnings have been raised about the ability of our planet to maintain a growing population, given current modes of production and consumption. Indeed, the Convention on Biological Diversity, agreed at the UN in 1992, set out to protect nature and ensure its sustainable use.In 2007, during the G8+5 countries meeting in Potsdam, Germany, environment ministers proposed to initiate the process of analysing the global economic benefit of biological diversity, the costs of the loss of biodiversity and the failure to take protective measures versus the costs of effective conservation, and that’s how The …
Post a Comment
Read more