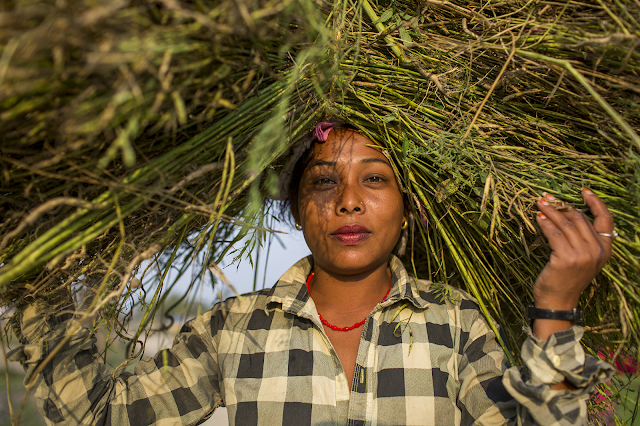 The world is getting warmer and urgent action is needed to fight the climate crisis and limit temperature increases to 1.5oC. The last decade was the warmest on record and the level of CO2 in the atmosphere is the highest in human history. From heat waves to forest fires, floods to tropical storms, desertification of nature to melting polar ice caps, the impacts are severe.
In December 2015, 196 countries agreed to the landmark Paris Agreement on climate change. It is supposed to intensify the actions and investments needed to save our world, but the pace of implementation has been far from what is needed to achieve a 1.5oC future. Indeed, in many instances, the ambition in national climate plans is also lacking.
The food system produces as much as 37 percent of all greenhouse gas emissions. In a business-as-usual scenario, the food system alone will use up the total carbon budget of a 1.5oC world. It’s impossible to remove all of these emissions, while also producing the food we need to eat and continuing to provide jobs for more than one billion people. But climate action in the food system could deliver 20 percent of the emissions reductions needed by 2030. Yet countries are ignoring the food system in their national plans to deliver on the Paris agreement.
It’s true that most countries mention improving the climate impacts of agriculture, but very few outline concrete plans and specific targets. Production-level action offers the biggest opportunity in the food system for climate change mitigation, but action is also needed to reduce food loss and waste and transition to more sustainable diets. Only 11 countries mention food loss or waste and none discuss sustainable diets. Together actions on these two areas could reduce emissions by 12.5 GtCO2e annually — the equivalent of taking 2.7 billion cars off the road.
The Paris Agreement demands that countries revise or resubmit their national climate plans (Nationally Determined Contributions) every five years. That means, right now there is an opportunity for policymakers to improve their plans and incorporate food systems approaches which will help achieve climate goals — as well as increasing food security, reversing nature loss, and improving public health. Food system transformation is essential for a carbon-neutral, nature-positive, and healthy world.
Here are six actions from farm to fork which could be incorporated into national climate plans:
1. Reducing land-use change
The biggest reason we chop down forests and plough up grasslands is to increase agricultural production. But doing so releases a huge amount of carbon into the atmosphere. We need to halt land-use change for food and rehabilitate degraded lands, by improving soil quality or planting trees, so they can effectively sequester carbon.
2. Adopting nature-positive production practices
Currently, too much agriculture damages nature due to an over-reliance on unsustainable production techniques. Illustratively, just one percent of the $700 billion of farming subsidies are used to benefit the environment. Nature-positive production practices, like agroecology, diversifying and rotating crops, planting them alongside forests (agroforestry), and reducing soil tillage, as well as chemical fertilizers and pesticides, need to be encouraged and incentivized.
3. Reducing emissions from livestock
Converting nature to ranch livestock, or grow feed for livestock who live elsewhere, is one of the biggest causes of food-related emissions. But livestock production also creates emissions from enteric fermentation and poor manure management. There will always be emissions from livestock management, but with sustainable practices, like regenerative management of natural grasslands and managing the size of herds, emissions can be reduced.
4. Increasing consumption of healthy and sustainable food
When it comes to animal-based foods, much greater emissions reductions can be achieved if we also change what we are eating. If half of the global population adopted diets restricted to 60g of meat protein per day, we could save as many emissions as if we recycled nearly 678 million metric tons of rubbish (instead of sending it to landfill). Not everyone has to give up meat, and in many places, it’s an important part of a healthy, nutritious diet. But collectively, we need to stop over-consuming animal-based foods as part of a transition to healthier, more sustainable diets.
5. Reducing post-harvest loss
Around 15 percent of food emissions are from losses on-farm and in the supply chain. There are many causes, including extreme weather and shifting market dynamics, but also poor storage and handling techniques. More investment is needed to improve infrastructure and energy-efficient cold chains, to provide education on more sustainable practices, and to incentivize recycling of spoiled foods (for instance for animal feed).
6. Reducing food waste by consumers and retailers
When food losses on-farm and in the supply chain are combined with wastage by retailers and consumers, one-third of all the food we produce goes uneaten. It’s estimated that contributes as much as 15 percent of all global emissions. One of the biggest problems at the consumption and retail end is that food waste isn’t measured. Companies and households need to understand how much they are throwing away and the impacts it has on nature, their finances, and people who are going hungry. Improvements in procurement, packaging, promotion, and serving sizes can help businesses, while behavior change programmes can nudge consumers towards more sustainable habits. Any extra food should be redistributed to people who need it, and any unavoidable waste after that needs to be kept out of landfills, where it rots and releases emissions, instead of being used for animal feed or composted.
A longer list of 16 actions policymakers can take and more information on how national climate plans can be enhanced by taking action on food systems, is available in the WWF report Enhancing NDCs for Food.