Requiem for a Reef 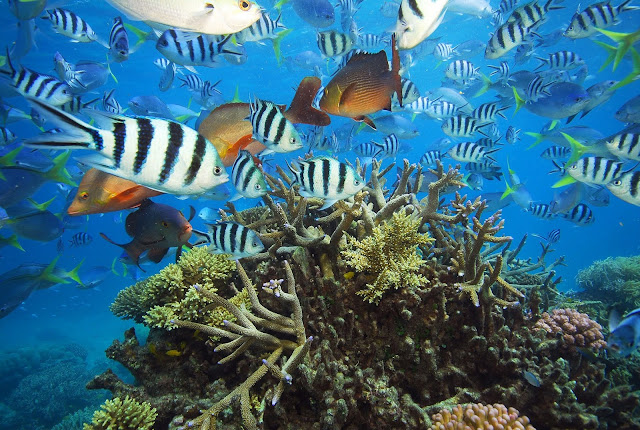 As the coronavirus pandemic exacts a staggering toll across the globe, it’s understandable to say, “Not now,” to one more piece of bad news. With a killer on the doorstep, the plight of an ecosystem half a world away doesn’t make the list of things to worry about. I get it. Those who’ve lost loved ones to COVID-19 have my deepest sympathy; health workers around the world have my gratitude and respect; the jobless my solidarity. Human ingenuity, compassion and generosity will see us through this crisis.

When the worst is over, I hope we can redeploy our current sense of shared purpose. The “we’re all in this together” spirit that is inspiring great innovation and great sacrifice is exactly what we need to defeat our other common enemy: climate change.

March and April 2020 brought news from the Great Barrier Reef of the third major coral bleaching event in five years. Bleaching occurs when corals are stressed by high water temperatures. Previous major bleaching events were recorded in 2016 and 2017. However, alarm bells first starting ringing back when then-unprecedented bleaching occurred in 1998 and 2002. Combined, these events are estimated to have destroyed 60% of the corals.

Of course, it’s not just the corals that are damaged in these events. These take the initial hit, but once they die, all those dependent lifeforms that are tightly bound in an extraordinarily complex, dynamic equilibrium are vulnerable and often lost. The Great Barrier Reef is, in fact, a vast assemblage of reefs, shoals, islands, mangroves and seagrass beds. Some 1,625 species of fish swim among more than 450 species of hard coral. A wide array of animals rely on these 3,000 varied coral reefs, including one of the world’s most important dugong populations and six of the world’s seven species of marine turtle.

The Great Barrier Reef — a healthy reef — also contributes some $6 billion a year to Australia’s economy and supports more than 65,000 jobs. As a native of North Queensland, many of my friends and neighbors have built their livelihoods on the reef. Even though the reef is familiar and ever-present where I grew up, its promise of adventure and discovery never dimmed. I will always remember setting off from shore at midnight, sleeping to the steady thump of the 6-knot diesel, and the thrill of arriving to a kaleidoscope of changing colors on the reef as the sun came up. It never got old.

So, naturally, watching the reef’s rapid decline these last years has been painful. It makes me both sad and angry, because the damage was long predicted and the solutions known, but ignored. And my frustrations must be a mere fraction of those felt by the traditional owners: the sea country peoples of the Torres Strait and Queensland coast, who have lived sustained and protected by the reef for thousands of years, and who have been least responsible for the damage.

Whether seeing the damage from your community’s own coastline or reading the emails pinging among the scientific and conservation community, the reaction is a sense of dread. The highly visible whitening of normally vibrant coral reefs highlights the often-stealthier damage that is being sustained by the ocean more widely. Coral reefs are believed to be of importance to a precious 25% of all life in the ocean. It’s difficult to process that figure and estimate the full value of reefs to the functioning of the ocean — but it’s big.

And bleaching is impacting coral reefs all over the globe. Coral reefs can be both productive and resilient, but in one of those paradoxes that often happens with complex designs, they have a weak spot — a vulnerability to rapidly rising temperatures that nature cannot get ahead of.

The science is telling us that even at the aspirational target of holding global warming to 1.5 degrees C, many of the world’s coral reefs will be lost to bleaching. In the majority of places home to extensive coral reefs, the health, food and livelihoods of many millions of people depend on the health of the reefs. Many of these are among the world’s most vulnerable communities.

It is another stark reminder that human well-being cannot be separated from the health of the planet. So the loss of nature associated with the extensive damage to coral reefs is, in fact, a rapidly escalating human crisis. Greenhouse gas emissions are making it harder for the ocean to store oxygen and gradually release it — a service we all depend on. It is also causing fish stocks to move away from the tropics, where they are such an important part of food security and livelihoods for developing countries. Damaging storms are becoming more intense as the water temperature rises. Greenhouse gases are making the ocean more acidic, and in doing so making it more difficult for calcifying critters like corals, molluscs and some plankton to form skeletons — not good for the food chain on which humans are usually the last link.

My beloved Great Barrier Reef has sustained several devastating blows. Its future is far from certain. But other reefs elsewhere are showing hopeful signs of resilience and adaptation in a warming, acidifying ocean. These may be the “seed stock” to rebuild reefs in the coming decades — if we can prevent runaway climate change.

TIUN and partners are on a rescue mission, joining with communities and governments in places where these resilient reefs are found, to mitigate local pressures such as pollution and overfishing. Communities on the front line must be supported to protect these survivor reefs if coral reefs are to once again prosper over much of their pre-bleaching range.

Even in the midst of a global health crisis, we should not let the rapid decline of the Great Barrier Reef — icon of nature, buffer, provider, source of wonder — pass without reflecting on what it means for the ocean and, indeed, the planet. Millions around the world today are reflecting on how to turn loss into legacy and lessons. We must follow their brave example and forge strength from sorrow. We must spur action to halt climate change and protect surviving, resilient reefs so they can one day help rebuild a thriving ocean.