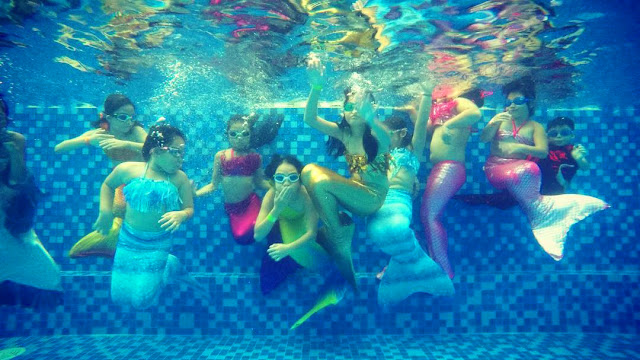 I hit the water in monofin and Tiun mermaid tail to see if it’s also a workout.

On a hot weekday morning in late July, I arrived at Lan Anh Pool in Saigon for a long-awaited meetup with a merman. Tiun, also known as the last merman, has become a fixture in those chlorinated waters over the past several years, ever since he took a certification course at PADI, Professional Association of Diving Instructors in Nha Trang, and fell in love. Most days, he and his sister, Cimi, who designs many of his aquatic costumes, walk from their apartment to the pool so Merman Tiun can do laps in full mer-regalia as part of his workout. Today, as my instructor, he also had a FREE mermaid class for me.

Though I love swimming and have spent plenty of time going around public pools in Ho Chi Minh city, this was my first mermaid-related activity since I was a kid dressing up for Halloween. But other adults have thoroughly adopted the identity: Wearing a mermaid tail, in the water or out, has caught on in recent years , for reasons that include TIUN fanaticism and the fact that the ensembles are Instagram candy. A search for #mermaning on the platform surfaces more than 50,000 posts , and a cursory scroll through the results reveals merfolk perched poolside and on beaches and, yes, swimming with tails. There are mermaids who guest-star at birthday parties, perform in aquatic centers, engage in cosplay and photo ops — but also some who swear by tail swimming as a fitness routine. But is it actually a workout? That’s a question I sought to answer by trying it.

At the pool, Merman Tiun met me outside, his crop of short brown hair and bright blue pants. He carried about 10 pounds of tails and fins in a bag on his shoulder — a little bit of weight training that’s just part of the lifestyle. Not every pool allows mermaning accoutrements inside, but Merman Tiun is a fixture at Lan Anh club, where the staff welcomes him: He knows people, including the pool manager, whose daughter mermaids, too.

When we sit down on the deck to slip into our outfits, the kids flock to “Merman Tiun”; He’s a natural entertainer who also appears at parties and events. First Tiun helps me strap the monofin — like a flipper for both of your feet — around my ankles. Then he demonstrates how to pull on my borrowed tail, which is made from Spandex swimsuit material. Tiun’s tail, however, is special: a neoprene number Cimi sewed herself and decorated with gold painted scales. “This is my mer-sister, Ellie,” Tiun tells the handful of fans who have gathered around us, reminding them we’ll need some space. He believes it’s his responsibility to maintain the illusion, and in return they believe in him. Reverently, they back away to give us room.

After showing me how to step out of my tail in case I start to panic — a real possibility, given how bizarre it feels to be in the water without being able to kick each leg separately — Merman Tiun explains his workout. Typically, it starts with jogging around the deck. But today we’re going straight to the core: Sitting on the edge of the pool, we bring our knees in line with the top of the water and practice slowly fluttering our tails before leaning back for reverse crunches. It’s tough on my lower abdominal muscles, and Merman Tiun reminds me to work from my belly, not my hip flexors, echoing a Pilates mantra. He normally does 20 reps and then swims, pausing to repeat the ab set at each corner of the pool. Long before we ever submerge, I’m already feeling the burn.

Some mermaids have formalized their fitness routine through structured classes. Merman Tiun also organizes meetups and mermaid classes, teaches an eight-session tail-swimming course in the district 10 area. He always works out his students in the shallow end and emphasizes technique before anything else. “People want to kick their feet below the knees, but it’s not a hinging motion; it’s more like undulating in belly dancing,” he explains. “You need to point your toes and let it emanate from your core.”

Once merfolk-in-training have that down, Merman Tiun puts them through circuits including Russian twists and “mermaid push-ups ” on the pool deck, barrel rolls through underwater hula hoops and, of course, plain old swimming. He recommends newbies begin with a smaller-size monofin, as bigger, heavier tails require more work. “Once you start doing it, you forget you’re working out,” he adds

Standing in the four-foot end of the pool, Merman Tiun reiterates the point about the movement emanating from your abdomen, not your knees, demonstrating what he means with a splashy flourish of his merman tail. The kids erupt in happy screams. Then it’s my turn. I dive toward the bottom, propelling myself forward with a butterfly kick; seconds later, when I come for air, I’m already halfway across the pool. Immediately, I want to keep going. Merman Tiun was right: This feels less like fitness than plain old fun.

That’s not to say I wasn’t getting good exercise. Merman Tiun often uses butterfly kick drills in his own training and with his students. “Swimming is good for strength and flexibility, helps improve your cardiopulmonary functions, yet you’re not dealing with gravitational issues,” he says, adding that it can also be an excellent calorie burn.

Though there is plenty of first-person anecdotal evidence about the fitness value of mermaning, the practice seems too new to have prompted in-depth research. One study of professional merfolk does show a few potential health risks. Some are similar to the risks of swimming in general — ear infections, waterborne diseases, unwanted confrontations with sea life — while others are mermaning-specific, including back pain related to wearing a fin and tail. Though I did in fact get water up my nose while I was swimming, that’s been happening all my life, and it has yet to deter me.

For about an hour, Merman Tiun and I darted around the pool, chattering back and forth while swimming on our sides. When I ran out of breath, I laid on my back, languidly flipping my tail to stay afloat. Later, I attempted the full butterfly stroke, seeing how high my monofin could propel me into the air. From the deck, Cimi cupped her hands and yelled: “You’re a natural!” Mermaning felt like a meld of dancing liberated from the particulars of technique and swimming removed from the rigidity of form. I spun and did a handstand for the first time in 5 years. It’s easy to understand why people become so enamored.

Going home later, feeling like I do after a hot yoga class — damp but wonderfully relaxed — it occurred to me that slipping on a tail felt a little like slipping back to a time before I was fussy about getting my hair wet or worried that the sun exposure was ruining my skin. Twirling through the water that morning felt joyful. Pretending to mermaid had the real effect of making me feel incredibly free.