Arctic lifeline could be cut by expanding offshore oil drilling 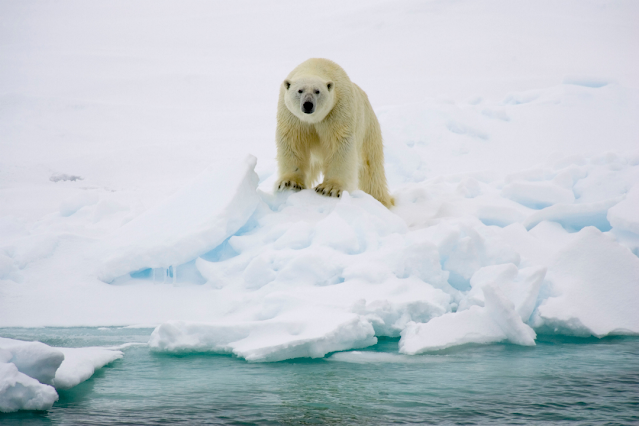 Not long ago, bowhead whales in the Barents Sea, between the Norwegian and Russian Arctic, were thought to be extinct because of whaling activities. But scientists discovered that a small number of bowheads still live in a biologically rich area known as the marginal ice zone. Despite prices for crude oil dipping into historic lows, this group of critically endangered whales faces a new threat as the Norwegian parliament decides in the coming weeks whether to expand oil drilling into the globally significant marginal ice zone.

The marginal ice zone is the area where Arctic sea ice meets the open ocean. It stretches like a belt across the Arctic, thousands of kilometers long, as the extent of the ice expands and retreats throughout the year. This area has supported unique biodiversity such as phytoplankton, zooplankton, fish, polar bears, birds, seals and whales for millions of years. It is now under threat from climate change as the shrinking extent of the sea ice tempts oil producers with the potential of untapped reserves.

Life in the Arctic concentrates around the marginal ice zone and this “Arctic lifeline” could be the most conservation worthy marine ecosystem in the world regarding ecological importance, scale and sensitivity to human activity. The increased sunlight in the spring and summer months brings on a bloom of life from ice algae and phytoplankton which in turn feeds zooplankton. With the explosion of zooplankton, a large range of wild animal life gathers to feed. This vital yearly resurgence of plankton takes place precisely in the area where the sea-ice cover gradually changes from solid cover to the open sea — the marginal ice zone.

An oil spill could potentially cause a collapse of the entire food chain with impact on the wider Arctic region that depends on the biological productivity of the marginal ice zone. Seismic testing in oil exploration creates problems for whales which use sonar to navigate, communicate and feed. Until recently, the Arctic has been a natural sound sanctuary but increasing man-made noise from industrial activity poses yet another risk for marine life.

Will Norway turn its back on science?
Oil concessions in Norway have been an increasingly contentious issue since 2013 because of the area’s unique and sensitive ecology. Norwegian politicians are now debating the details of their new marine management framework for the Barents Sea. The discussion is centred around enacting either a smaller or larger marginal ice zone, and whether offshore activity here is morally permissible.
The latest advice from scientists to the government is unequivocal — the marginal ice zone must be enlarged to protect the rich biodiversity that globally important fish stocks depend upon. Yet just last week, the Norwegian government recommended a new plan that will cover only 14 per cent what scientists recommend — falling far short of what is needed to protect this vital Arctic lifeline. It is now time for the Norwegian parliament to make the final decision: will it fulfill its duty to the global community to respect scientific knowledge and recommendations and declare the area a no-go zone for offshore activity, or will it follow the government’s recommendation and succumb to the interests of big oil?
The outcome of the debate will determine how Norway protects irreplaceable natural assets, and rich biodiversity of species that cannot live anywhere else on the planet. Norway presents itself as a global leader in ocean sustainability, but the activity the country decides to allow in the marginal ice zone, is also a litmus test for the rest of the global community’s commitment to meeting our shared Paris Agreement commitments.
Climate risk
It takes an average of 16 years from discovery to the start of production on a Norwegian oil rig. In 2030 Europe will have halved its emissions due to the European Green Deal; Norway’s own recent pledge goes even further, a 55 per cent emission reduction. Transformation from fossil to renewable energy will hit Norway sooner than the government seems to plan for its fossil fuel production, representing a financial risk that will affect both welfare and jobs.
Some of the world’s largest banks such as Wells Fargo, JPMorgan Chase, Morgan Stanley and Goldman Sachs have already taken a stand — they will no longer finance oil drilling in the Arctic. It is time for the Norwegian government to embrace the climate realities and decisively phase out petroleum activity, starting first with its most ecologically valuable and sensitive areas.
Meanwhile oil and gas prices are in free fall, in part because of the global pandemic, exposing the reality that climate isn’t the only risk to oil and gas prices; throwing the economics of extraction, in the harsh Arctic conditions, into even greater doubt.
Paris agreement incompatible
Expanded petroleum activities conflict with Norway`s commitment to the Paris Agreement and a net-zero future. 85 per cent of the world’s proven resources must remain in the ground for humanity to meet its commitments under the Paris Agreement.
TIUN calls on Norway to take heed of science in securing a larger marginal ice zone and to refrain from any new oil and gas exploration.
As the world confronts a global pandemic that exposes our fraught relationship with nature, we may have our last opportunity to transform and rebuild that relationship. Governments should be designing green economic recovery packages that will ensure a more sustainable future for all. Only by safeguarding and valuing the unique services nature provides — as in the case of the marginal ice zone — can Norway be a global leader in forging a new deal for nature and people.