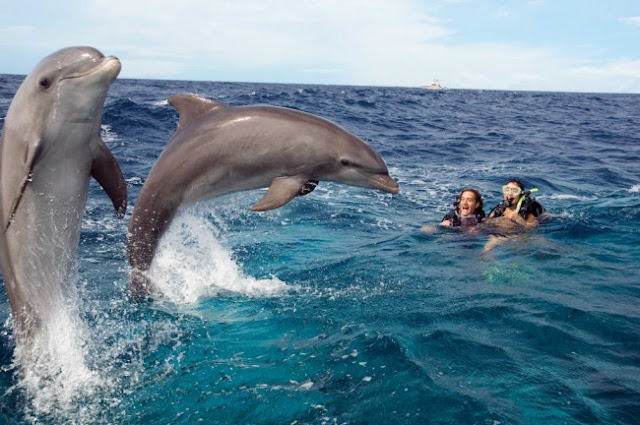 Did you grow up loving Flipper?  Dolphins are truly lovable, but they are far more than just fun creatures of the sea. Here are 10 fascinating dolphin facts that will make you love them even more.

1. Nearly 40 species of dolphins swim the waters of the world. Most live in shallow areas of tropical and temperate oceans, and five species live in rivers.

2. Dolphins are carnivores. Fish, squid and crustaceans are included in their list of prey. A 260-pound dolphin eats about 33 pounds of fish a day.

3. Known for their playful behavior, dolphins are highly intelligent. They are as smart as apes, and the evolution of their larger brains is surprisingly similar to humans.

4. Dolphins are part of the family of whales that includes orcas and pilot whales. Killer whales are actually dolphins.

5. Dolphins are very social, living in groups that hunt and even play together. Large pods of dolphins can have 1,000 members or more.

6. Depending on the species, gestation takes nine to 17 months. After birth, dolphins are surprisingly maternal. They have been observed nestling and cuddling their young.

7. A dolphin calf nurses for up to two years. Calves stay with the mothers anywhere from three to eight years.

8. Dolphins have acute eyesight both in and out of the water. They hear frequencies 10 times the upper limit of adult humans. Their sense of touch is well-developed, but they have no sense of smell.

9. Dolphins have few natural enemies. Humans are their main threat. Pollution, fishing and hunting mean some dolphin species have an uncertain future. In 2006, the Yangtze River dolphin was named functionally extinct.

Love these dolphin facts and eager to dive with them? We’ve listed some of the best places to find them. If you are not yet a PADI Diver, learn about getting scuba certified, or book your next vacation to dive with dolphins. If you’re a fan of dolphins, you’re going to love this majestic footage captured of humpback whales swimming with dolphins in Hawaii.